A real turning point in the story of Madame Pivot was the transfer to the current headquarters in Ponte a Ema, at the southern edge of the city of Florence. From the first stages of home production to the present showroom there was an intermediate step, the famous “garage” warehouse near home, worth mentioning since it seems to be a sort of compulsory initiation rite on the road to success which can’t be avoided. If Bill Gates, Steve Jobs and Jeff Bezos have started their empires in a garage, also Leonardo Chellini must have thought it was wise to lock himself in one, at least for a while.

After a few years squeezed among narrow lines of shelves, the first dreams of glory and expansion arrived. So many interesting opportunities and realities were calling from out there... clients and tango nomads to be properly attended and hosted, a growing logistic situation with all its needs and - most of all - the call of the green revolution!

We have always been attentive to the environment’s needs, therefore if we had to move we had to do it properly, investigating the new technologies and playing by the green rules. With the help of a forward-looking architect friend and of a ClimateHouse energy consultant we started a big project which has been very demanding but also extremely satisfying, with the ambitious goal of becoming the first case in Italy of artisan/workshop building with class A energetic rating!

The local newspaper's article below lists the series of building works and implementations which were carried out to obtain the certification and a very satisfied Mr. Chellini who seems to point out at its brand new copper ventilation system. The truth is he was showing off his best Tony Manero’s move before grabbing his shoes and finally running out to celebrate his Saturday night, in a milonga of course! 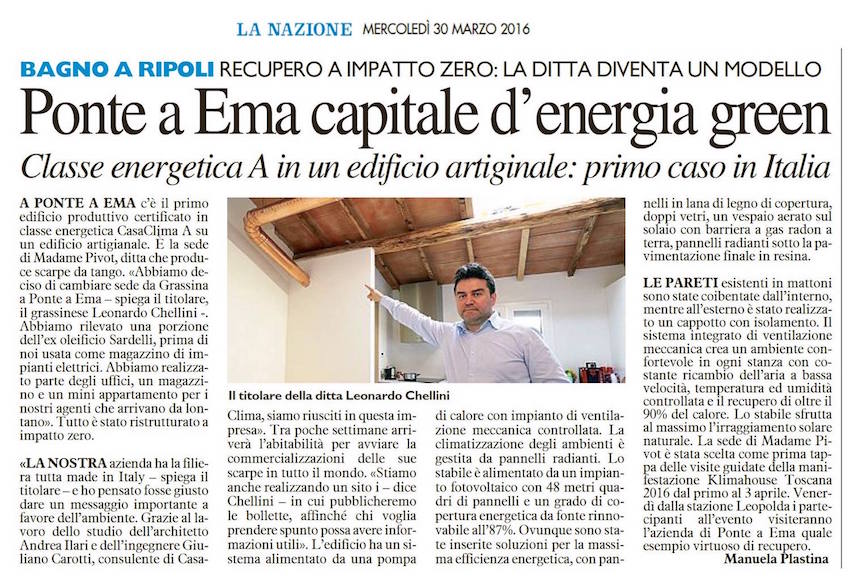